The Day My Life Changed… Again 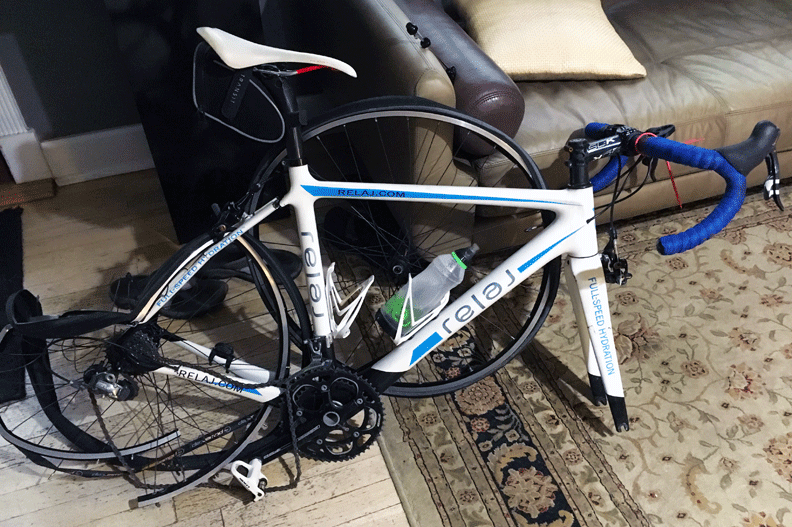 Change is a constant in the Universe (an apparent oxymoron). Life changing events usually come without warning (or, are we warned, if we're paying attention?). Such was the case for me on this day.

I came to the realization many years ago: change is good.

I look forward to it. Relish it. And can feel a little stagnant when there’s not enough of it in my life.

But, in addition to the changes we deliberately set in motion, ‘unexpected’ change also is part of life. In that category, there’s good, bad, and the very bad.

When it comes to unexpected change, everyone is fair game. No one is immune. ‘Things’ happen. Sometimes these things are just ‘one of those things’. Other times, they can not-so-subtle messages from the Universe, trying to get your attention.

On October 20, 2015, one of these unexpected things became my new reality…

While out on a daily bike ride, (20 to 25 road bike miles for exercise each day), only 10 minutes into the ride, a fast moving car, likely going about 45 miles per hour, or faster, crashed into me from behind. Here’s an image of the speed data from my bike computer GPS: ​Speed of Bike at Impact

​The image shows the speed of the bike, upon which the GPS was attached, going from about 20 miles per hour to 38 miles per hour in a ‘split-second’.

No one could accelerate that quickly, not even professional cyclists, and I certainly was not anywhere near that good.

In fact, I never pedaled a bike faster than about 28 MPH, and that probably was wind aided.

For my bike to accelerate that quickly and to that speed, due to the fact that my feet were clipped into the pedals, which would slowed the acceleration of the bike after it was hit by the car as my feet would first have to be separated from the pedals, the car had to have been going faster than the top speed my bike reached after being struck.

45 MPH is a pretty good estimate of the speed the car was likely going when it hit me.

"...​I was coherent, but my conscious self, my True Self, was not there to experience the pain."

It was a violent collision. Based upon witness reports and damage to the vehicle, after disconnecting from the bike, I smashed into the front windshield, then tumbled over the top of the car and smashed the rear windshield and landed on the other side of a very wide, asphalt road.

I have no memory of being struck by the car or of anything that happened after that for the next 2.5 weeks. My True Self had left my body and I have a vivid and very specific memory of the exact moment when it returned, and I then became consciously aware of my surroundings.

My wife said that I had been having conversations during the time when I was not in my body, and I was coherent, but my conscious self, my True Self, was not there to experience the pain.

I am grateful for that.

I do have many memories of the rest of my days in the hospital – approximately 4 more weeks – beginning from the point when I reentered the body.

I spend a total of 6.5 weeks in the hospital celebrating Thanksgiving (a U.S. holiday) with my family there.

They brought in a giant turkey and many wonderful side dishes and we had a nice feast in an outdoor area the hospital set up for us. They even allowed my dog to visit, which was the first time I’d seen her in over a month. ​Thanksgiving Day, Seeing my Precious Abby for the First Time

​My injuries were extensive. I thought about including images of x-rays taken when I arrived at the hospital but decided that this would be TMI (too much information).

I had broken bones from head-to-toe and required 2 surgeries to put me back together: 1 to repair the Burst Fracture of my T-4 vertebrae with 2 titanium rods to fuse my spine (the doctors say it’s a miracle that I’m not paralyzed); and 1 to put titanium in my right femur (the orthopedic surgeon stated that, based upon what he found when he opened up my leg, it was a miracle that I did not bleed out and die).

I have no memory of either of these 2 surgeries, just the scars.

I also had a fractured skull. Had I not been wearing a helmet, I’d be dead. I was only 2 blocks form my home and in a very low traffic and safe area when I was hit.

"​Well, some have said that my story is inspirational. Perhaps it is. But that’s not why I’m sharing this."

My advice to all: Always wear a helmet!

I had a cracked Sternum, a broken right humerus, several fractured ribs, a broken bone in my right hand and one in my left foot. I didn’t learn that I’d also fractured my right fibula until after I’d already been back up on my feet for about a week, re-learning how to walk and retraining my completely atrophied leg muscles and balance.

Why do I tell you all this?

Well, some have said that my story is inspirational. Perhaps it is. But that’s not why I’m sharing this.

No… I’m sharing this information to help introduce myself to you, to let you know that I have no reason to hold anything back.

I’m lucky and grateful to be alive and am even luckier (or more blessed) to be able to walk.

As I have said in other writings on this site, some people wonder if this incident was the catalyst which turned me toward Spirituality; led me to look there for answers.

That is not the case. I had already been on my Spiritual journey for well over 30 years. My thinking is: this accident, and all the challenges and other things which came afterward, were more of a culmination of everything I’d already learned through my understanding of Spirituality.

It was not a test. But it was a way to use the strength of my connection with my True Self to propel myself forward; to quickly advance in my healing and the rehabilitation of my body and its atrophied muscles, and to get back to a life of ‘normalcy’.

At times, it has been a difficult journey. As of this writing, I’m still working through the remaining PTSD issues and its associated anxiety.

I will overcome all that, too. I won’t give up. Neither should you. ​Sitting in my Back-Brace, 'Enjoying' a Hospital Meal

Keep working toward your goals. And the first goal everybody should have on their list is to connect with their True Self; to become a Spiritual person.

Spirituality has become mysterious, become enshrouded in a cloud of secrecy. It’s not supposed to be that way. Spirituality is our natural state of being, but most don’t know what being Spiritual really is and how to use it in their lives.

Religions are supposed to teach this. But most don’t… Not the western religions, anyway. There are some eastern religions which do address this most important facet of our lives.

But, we don’t need to be monks or live in a cave somewhere in India to live a Spiritual life, to be Spiritual. That’s not what Spirituality is all about.

"​Spirituality is about one thing: Learning about the duality within"

Spirituality is about one thing: Learning about the duality within – discerning between its 2 components, and then choosing to connect with and live from only one of them: The True Self.

This is a moment-to-moment choice and even the greatest enlightened masters have chosen the Ego self at times. After all, we’re only human, right? Even the most enlightened… They’re still human, too.

Sharing and teaching this information is now my life’s work. I want to help people understand Spirituality and choose their True Self.

For a limited time, get this mini course with
6 Discoveries to help you be happy!