Spiritual Development/Awareness:
I Almost Died in The Grand Canyon 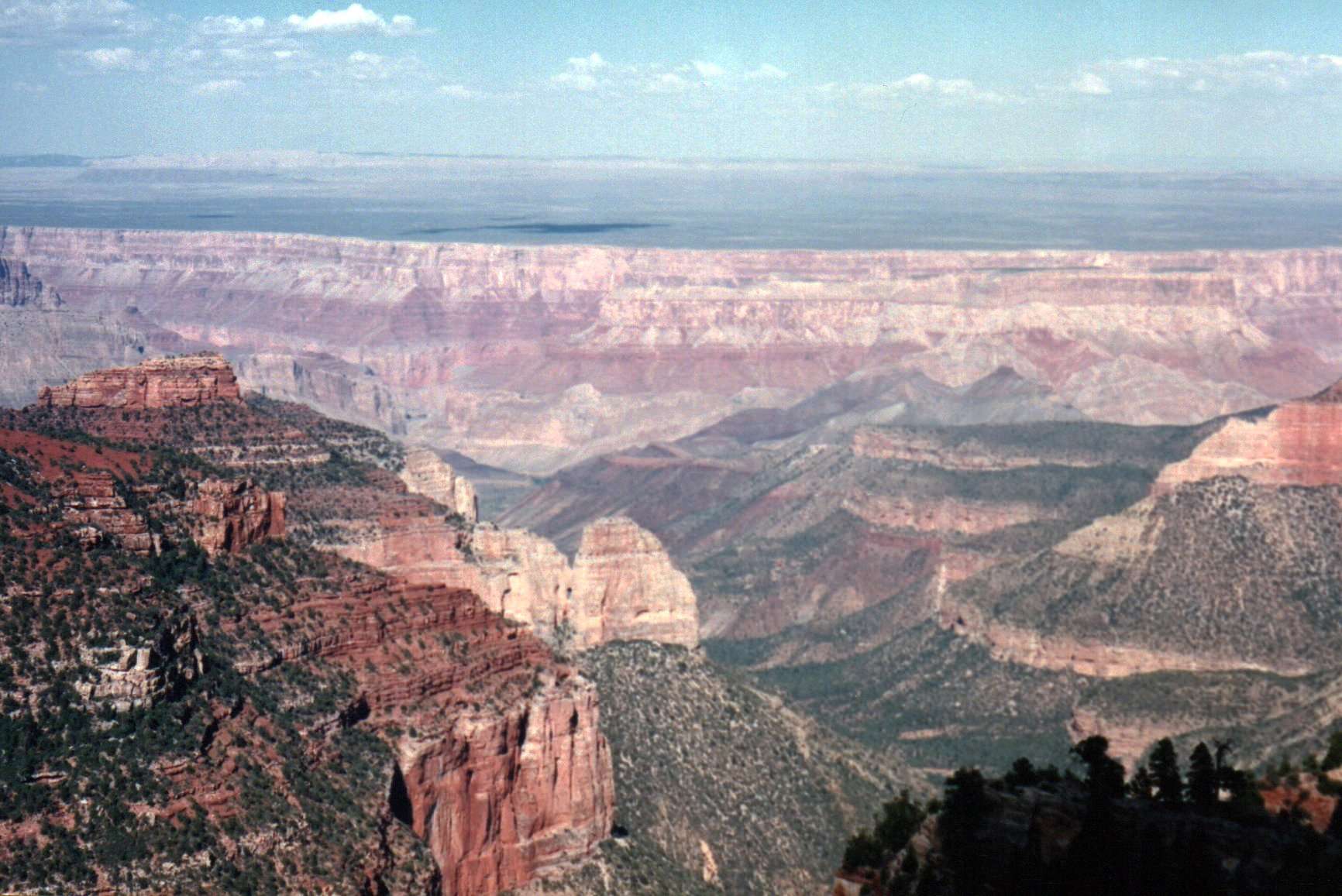 Out of water and physically exhausted in the 90 degree-plus, dry heat, I focused on just 1 thing. I believed it was a struggle for my life as willed myself forward, upward, along the seemingly endless climb up the Kaibab Trail at the North Rim of the Grand Canyon.

Exhaustion had reduced my focus to only this: take the next step.

It had come to that. Just take 1 step. And even that felt impossible. Dying on this long, steep trail seemed like a real possibility.

The day had started early for me – around 7 AM – and I was on the trail by 8:00ish, after a decent breakfast at the lone restaurant on the North Rim.  It was now late in the afternoon – around 3 PM – and I still had a long way to go.

I was hungry, sweaty, and worried as I continued climbing the trail’s many switchbacks that had been worn into steep, mostly vertical wall of the Canyon.

I was woefully unprepared for this hike. I hadn’t researched it before starting out. This trip was my first out west and I’d been told by some friends that this was a great hike, so I decided to do it. ​Canyon Bridge from Top of Trail ​Bridge from Up Close... Down in the Canyon

A Hike for the Ages

Just 2 days earlier, I’d landed in Las Vegas, rented a car and headed to the North Rim, where I’d arranged a 3 day stay in one of the cabins there.  After that, I’d be heading to Bryce Canyon (a fantastic place) and Zion National Park, where I’d also arranged accommodations in the park.

I was a newbie to the high-heat/low-humidity combination in the western United States and I really didn’t know how hot it would get during the day, or how much water I’d need for this hike.

I started out with only 2 16-ounce bottles of water, which seemed like more than enough when I began. The days morning temperatures were perfect, in the high 60’s.

I was completely unaware of just how difficult the hike would be and I grossly underestimated my body’s needs for water – hydration – and food for quick energy.

The trip down into the Canyon was fantastic; beautiful.  (All the pictures on this page were taken with my Minolta 35mm SLR camera and a very inexpensive 70-300mm zoom lens.) ​The Canyon is Awesome

I was greeted with a new dose of Canyon awesomeness with each switchback and turn on the trail.  The panoramic vistas were eye-candy, each filling me with an extreme sense of wonder and joy.

But, even though I was working with gravity – heading down – and I was young and in reasonably good physical shape, I quickly noticed a steady ‘burn’ in my thighs.

I also felt pain from the tops of my running shoes digging into the toenails on my big toes (I was not wearing hiking shoes/boots). Within a week of this adventure those toenails turned black-and-blue and fell off a few weeks later.

Innocently, I did my best to ignore these warning signs and kept going: down, down, down.

By the time I arrived at a very welcomed, flatter section along the trail, I had hiked several miles into the Canyon.  There, I found an unexpected, yet much needed and welcomed surprise: an oasis… A water fountain.

I was ready for a break. I stopped, rested, drank from the fountain, and gratefully refilled the 2 small water bottles, which had been empty for quite some time.

Exploring the True Self

It had been my original plan to walk all the way to the Canyon’s bottom.  But, when I arrived at the water fountain, I reassessed my situation.

I came to the realization that I might be in trouble… That I needed to turn around and head back up.  Immediately.

It was later in the day than I’d anticipated, and I was physically depleted.  In addition to being down to my last reserves of energy, I also felt the onset of a splitting headache, alerting me to the dehydration my body was already suffering.

Just the thought of climbing back up and out of the Canyon was daunting.  Fearing that I might have to spend the night in the Canyon on the steep incline of the rocky trail, (and I was not at all prepared for that – I didn’t even have a jacket with me, and the night temperatures would be dropping into the 40’s), I began the long and arduous climb back to the top.

"​I seriously questioned my choices that day and was very troubled by the idea of having to spend the night on the trail."

As I continued the hike upward, now using different muscles than the trip down, and the force of gravity quickly zapped the energy from my legs, I was forced to go deep inside myself for motivation and inspiration.

I was very thirsty.  Even though I’d refilled my small bottles, that water was gone quickly: about one third of the way back up.  I seriously questioned my choices that day and was very troubled by the idea of having to spend the night on the trail: without water or food, or even a jacket and flashlight.

Making a fire was not possible for me.  I had no matches and I was not at all skilled in survival techniques.  I had no idea how to make a fire without matches.

My saving grace: At this point in my Spiritual development/awareness, I’d already learned how to look deeply within, to contact my inner True Self.

(I didn’t call it that back then and didn’t know that this is what I was doing.  I just knew I was calling upon a higher, inner power.)

The powerful voice within answered my call for help, assuring me that I’d be okay while encouraging me to keep going.

“Just focus on the next step” it said.  “One step at a time.  Just take one step; the next step.  Forget about the bigger picture.  Don’t think about the enormity of the gargantuan task ahead.” ​A Deer Along the Way ​He Posed for Me

I took the advice and simply thought about moving one foot at a time, one-after-another, very slowly climbing my way up the steep incline.

It was good advice; powerful. It was the only thing that kept me going.

Hours later, I did make it back to the top.

Grateful, I stumbled to my rental car, which was parked a short distance away. I opened the driver-side door and fell into the seat, immediately passing out for at least a half hour.  I was awakened by the voices of some people walking by.

With exhaustion consuming my body, mind, and spirit, I drove back to my bungalow. After fumbling with the keys, I got the door open, went inside, and fell onto the bed.

I passed out.  Some 4 hours later, probably about 9 o’clock that evening, I awakened, hungry and thirsty.  I had a massive headache.

After taking some acetaminophen for my pain, I made my way to the restaurant and had dinner, making a point of drinking lots of water.  That night, I slept for about 12 or 14 hours, awakening the next day to a body strained and sore from the exertion it had endured.

But… I was alive and very happy to be there.  I went back to the restaurant, ate some food and went for a very easy hike on a very short and flat trail along the rim of the Canyon.  It felt good to move my muscles.  They loosened up.

This was only the second day of my week-long trip, and it could have been a disaster. Instead, my True Self took care of me – answering my call for help – and I was able to enjoy the rest of my time at both Bryce and Zion National Parks.

So, what was the lesson?  Well… For me… It was all about tapping into the inner strength we all have, the inner power of the True Self.

More than that, though, it also was a good lesson for me; one that I still work with each day:  Tiny steps in the right direction can yield giant results. To never give up. To do what’s necessary to reach the goal.

It was a great comfort having the company and assistance of my True Self for this most unexpected circumstance. Without it, things might have turned out very differently. I encourage everyone to learn to contact this part of yourself, your inner power, your True Self.  It’s already inside you, waiting for you to call upon it.  If you don’t, it won’t become part of your life.

Unlike the Ego self, the True Self will never impose its will upon you, your choices, or your life. It simply waits in the background to be recognized, called upon.

But it’s always there and will serve you whenever it is asked, even if after it’s been ignored and neglected for long periods of time.

It has no judgement. It is there for you. It welcomes you with open arms and, as I have found out over the years, a very good sense of humor.

Have you had a similar experience?  If yes, please write a short comment below, detailing your experience…