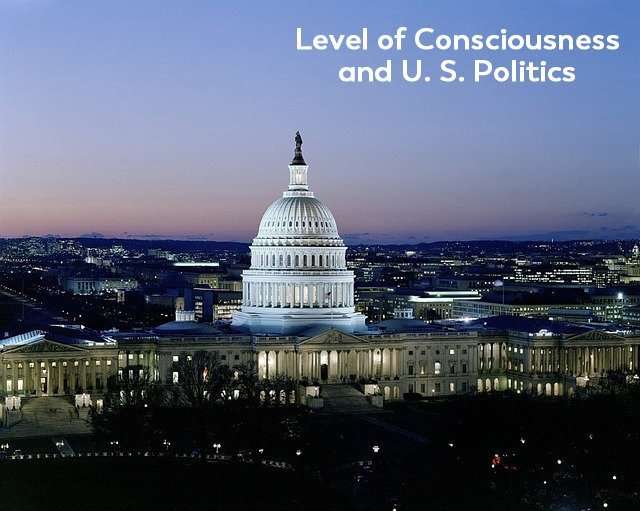 In this post, you will find the most current calibrations for both the Democratic and Republican Parties in the United States of America, as well as their current political platforms and key members, Nancy Pelosi and Mitch McConnell.

The calibrated level of consciousness of politics and people in positions of political power are important factors. Having this information about the institutions and people upon which we place our good faith and trust, and rely upon to properly govern, gives us a better understanding of our elected officials and government.

Knowing if a person’s judgment is absent integrity (below the level 200 on the Dr. David R. Hawkins’ Map of Consciousness) will help you know how they will govern, and also provides insight into what they’ve done in the past, and why.

Commons sense says that a person calibrating in the mid-level range, between 300 and 500, will typically, but not always, make decisions that are truly better for the majority than will someone who calibrates below the level 200.

There was no judgment involved in making these calibrations. And they should not be used to ‘judge’ the institutions and people calibrated here as being ‘good’ or ‘bad’. That’s not what calibrated levels of consciousness are about.

This information is offered to help evaluate the choices we have in upcoming elections. Knowing an institution’s and a person’s calibration will offer insight about whether they are more interested in doing what’s better for the majority of those being governed, or better for only themselves and their donors, or simply the retention of perceived power.

If we as voters make better choices about our leaders, we will have a better and more productive government which will lead to improvements for people, countries, and the world.

First, let’s look at the US Congress – the entire institution as a singular unit.

This far below 200, the level of integrity, and does provide insight, perhaps explaining the US Congress has been in such disarray and has been operating in a dysfunctional state for the last decade.

Next, let’s look at some of the components of the US Congress.

Collectively, the Republican members of the US Congress calibrate at 212.

The average calibrated level of consciousness for the Democratic members of the US Congress is 223.

What about Congresses leaders?

Nancy Pelosi, Speak of the House of Representatives calibrates at 287. The fact that she is calibrating at a level higher than the average calibration of the US Congress is not a surprise.

Mitch McConnell, Senate Majority Leader and a Republican Senator, calibrates at just 141. Given his past actions, this also is not too much of a surprise.

It is surprising, though, that Senator McConnell has risen to become the Majority Leader  considering the fact that he calibrates below the Congressional average for the Republican Party, especially since there are other Senators in the Republican Party who calibrate higher – above level 200.

Let’s take a look at the national platforms of both US political parties.

The stated Republican platform (not the actions the party actually takes, or the votes they cast, but the platform itself upon which they claim to believe) calibrates at 257.

The stated Democratic platform calibrates at 341.

What about liberal vs. conservative?

Here are the calibrations as of this date, 4/28/2020 (Please note: this type of calibration can change considerably as the definitions imposed by the participants change.):

The Politics of Divisiveness

The last calibration for this particular post is something that brings the two parties together in an unbecoming way. This is the practice of divisiveness.

Divisive political strategies and dogma, including slogans, ads, and even policies which deliberately set out to create separations between people – The Politics of Divisiveness in the Unites States – calibrates at: 148.