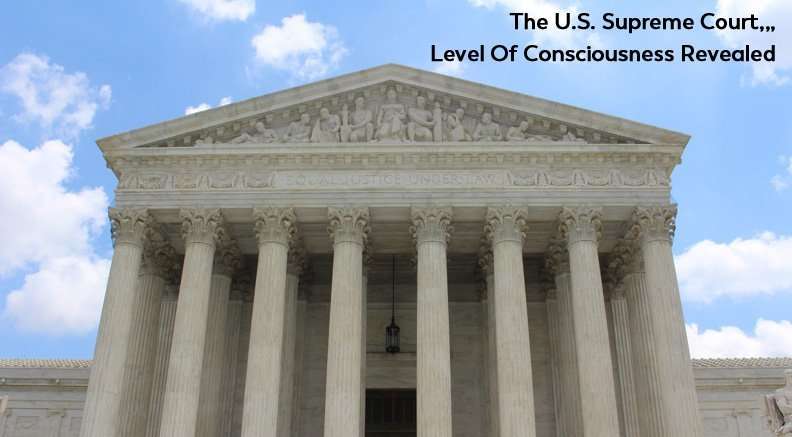 This post will discuss the calibrated level of consciousness of the Supreme Court of the United States of America. Calibrations were completed as of May 2, 2020 and include a level for the overall concept of the Supreme Court as an institution – based on the way nation’s founding fathers intended it – as well as the average calibrated level for all its current members and the levels of some of its individual members.

The Highest Court in the Land

Based upon the calibrated level of consciousness for the idea, the concept of a third branch of government to balance out the other 2 branches created by the founding fathers of the United States, the Supreme Court as an institution, really was intended to be supreme, beyond reproach.

And, as the highest court in a land of laws, and one whose laws are continually challenged and used by the lower courts to evaluate situations and people’s lives, the creation of such a court was a good idea. It still seems to be.

The proof of such a statement lies in the calibrated level of consciousness for this concept and the institution born from it.

The Supreme Court of the United States of America, just the institution itself, calibrates at level 677.

What About the Justices?

In this post, we’ll take a look at the average of all the Justices sitting on the court right now, as well as a few of its members.

The average calibration for all the Justices currently on the court is: 389.

But, that which might be expected, and the actual reality of a situation, are not always congruent. Expectations and reality can be very different.

And, given the degradation of accountable governing we have seen over the last 30 years in the United States, and the excessive partisanship that has arisen both within that government and in much of the populace of the country, lower calibrated levels are to be expected.

It is true that 389 is above the level of integrity. But 389 also is a significant drop from the past.

50 years ago – on May 2, 1970 – the average calibrated level of consciousness for the members then sitting on the United States Supreme Court, was above the level 500, but below 600.

Needless to say, 389 is a significant drop.

Just to round out this post, and more members of the court – past and present – may be added in the future, here are the calibrated levels of consciousness for 3 of the courts current Justices:

If you’d like to better understand calibration and levels of consciousness, please check out What is a Calibration?